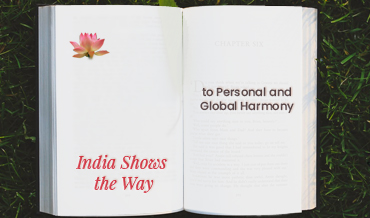 INDIA SHOWS THE WAY- to Personal and Global Harmony

Global attention needs to focus today to the spiritual insights of India as humanity faces such an existential crisis that its aspirations, achievements, wealth and property, the loved ones and everything else can get vaporized in a nuclear holocaust any time.

This is the result of the materialistic stance of modern science that blocks the spiritual values, the fuel for refining human life. Overcoming the crisis depends on cultivating a scientific understanding of spirituality.

India’s spirituality was evolved through ages of open-minded inquiry of the ancient explorers. Today modern science has developed to such a stage that the rationale of spiritual values discovered by the sages of India can be convincingly conveyed worldwide as a super-biological science.

We are on this essential campaign through research-oriented books that integrate the ancient insights and modern scientific perspective and through our magazine, Jnanageetha (Malayalam), which will soon have an English version also.

This need inspired even a scholar in dialectical materialism, Prof. Alexander Spirkin, of the erstwhile USSR Academy of Sciences, to observe in his book, Dialectical Materialism, as follows:

“They [the sages of ancient India] knew much that even today is beyond the ken of European scientific thought, or that it ignores, often trying to conceal its helplessness by asserting that oriental wisdom is mere mysticism, and thus showing their inability to distinguish the rational but not yet fully understandable essence from various figments of imagination.” He concludes the two-page comment with a query: “Does it not go to show an astonishingly high level of culture that should arouse our admiration, gratitude and desire to study!” (Progress Publishers, Moscow ,1983)

This vital need is emphasized by the farsighted historian, Sir Arnold Toynbee, thus: “In this transitional chapter of world’s history, a chapter which had a Western beginning, it is already becoming clear, will have to have an Indian ending if it is not to end in the self-destruction of the human race.”

Till the end of the 19th century when classical physics reigned the human thought, Vedanta and Yoga were considered by many as ‘mere mysticism’. But with the emergence of nuclear physics, which placed Energy as the very basis of the manifested universe, science achieved a pliability to converge to the spiritual concepts of India, essentially based on Paara-shakti, the Energy Supreme.

The logic of Vedanta and Yoga can be made today more explicit to the science-oriented modern mind. The various branches of science, physics, genetics, neuro-science, etc., are getting equipped to investigate into these insights for the greater purpose of evolving a superior world civilization, eschewing war and destruction, in tune with the Vedic motto, vasudhaiva kudumbakam – the world is a family.

While such integrating efforts are a vital necessity, the academic field seems to be lethargic in this context. Dedicated to this essential research, the publications of Integral Books are oriented to this global need. The books present the rationale of the ancient insights in modern terms. They kindle rethinking among the materialists, impress the scientists and inspire the devout. Please visit our website www.integralbooks.com .

As Prof. Alexander Spirkin points out, the ancient sages of India knew much beyond the ken of European scientific thought. This effort to create scientific awareness of India’s spirituality will inspire modern science to shed its mechanistic stance to bring about a paradigm shift so necessary today to evolve a humane civilization. The goodwill and support of philanthropists will help reinforce the mission to render this vital service on a universal range.