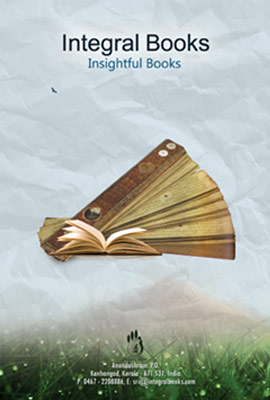 Integral Books is a research and publishing mission committed to present India's spiritual heritage with an updated perspective - a vital need of universal significance, when humanity is facing the severest existential crisis in history, even the possibility of total annihilation! The materialistic stance of Science has pushed the world to the edge of such a blind end.

Can mankind survive this and evolve to a higher stage of existence? With all the physical comforts the technological progress provides, this question agitates every sensitive mind, as a nuclear holocaust is looming above like the Damocles' sword. Humanity is seeking some reassuring insight for a more meaningful existence and the global attention is focussed on India at this very challenging juncture.

"The sages of ancient India discovered astonishingly subtle and profound psycho-biophysical connections between the human organism and cosmic and subterranean processes," Unexpectedly, these words are of a scholar of dialectical materialism, Professor Alexander Spirkin, who was the head of a section of the erstwhile USSR Academy of Sciences.

"They knew much that even today is beyond the ken of European scientific thought, or that it ignores, often trying to conceal its helplessness by asserting that oriental wisdom is mere mysticism and thus showing its inability to distinguish the rational but not yet fully understandable essence from various figments of imagination...."

He concludes his two-page tribute to India's ancient explorers thus: "Does this not go to show an astonishingly high level of culture that should arouse our admiration, gratitude and desire to study!" (Dialectical Materialism page 339, Progress Publishers Moscow -1983.)

This need becomes very significant in the light of the following warning of Sir Arnold Toynbee, the renowned historian:

"Today, we are still living in a traditional chapter of the world's history, but it is already becoming clear that, a chapter which had a Western beginning will have to have an Indian ending if it is not to end in the self-destruction of the human race."

This calls for a linking of the modern scientific perspective with the traditional logic for its easier grasp as the modern generation is losing touch with it under the lethargic approach of the educational system in this vital need, though promotion of this knowledge is an effective means to counter religious and materialistic fundamentalism that threatens the world.

Linking the ancient spiritual insights of India with the modern scientific perspective is the need today to draw universal attention to these profound treasures, which as the Russian scientist emphasizes "should arouse our admiration, gratitude and desire to study." In fact, these are the heritage of the whole mankind.

This mission was begun more than three decades ago, on individual initiative as a part of exploration of the in-depth dimensions of life, with an integrating approach to spirituality and science. This was begun with the publication of the book Sri Mookambika: The Radiant Grace, on the vibrant centre of spiritual Grace in the Western Ghats.

Almost a single-handed effort with the spirit of in-depth inquiry and sense of social commitment and passing through stringent phases gradually this could reach a stage of universal acceptance. It is now functioning as a private limited company of a few like-minded.

Its intellectual relevance is reflected in the following views of Kathlene Daniel, Texas, USA: "In this country, there are volumes of scholarly treatises available, but your books are for open-minded people with a Western (read: scientific) bent....I think the simplicity, brevity and straightforward presentation of the universal natural principles is their greatest asset. They can be a bridge over a yawning gap in people's perceptions and understanding."

The welcome to this research mission is exemplified in the two following comments on the book, The Self: A Biological Introduction to the Bhagavad-Gita Vol.1. One is from an eminent scholar, Sri P. Parameswaran, Director Bharatheeya Vichara Kendra, who observes: "You have done a signal service by publishing this wonderful book for which seekers of Truth all over will be indebted to you." The other comment is of a Western academician, Dr. A.D. Amar, Chair and Professor of Management, Seton Hall University, U.S.A.: "It is a brilliant interpretation of Gita that digs deep into Hindu philosophy to connect Gita to the understanding of the Self in the universe."

This is not as attempt to explain the profound spiritual concepts from the present levels of scientific knowledge, which constantly change, but a timely application of the investigative scientific temper for linking and clarifying the life-evolving ancient insights according to the intellectual needs of the current age, which will equip Science to shed its mechanistic stance by imbibing the higher perspective of the in-depth spiritual vision.

Spiritual Values – the Fuel of Evolution

The ancient explorers utilized the faculty of the human mind to reflect upon itself and gradually stepped up experiencing the higher dimensions and faculties of consciousness. They discovered the in-depth facts of life and its relation with the universe. The philosophical questions arising from modern science today tend to seek answers from their insights on the relation between matter and mind, the nature of consciousness, its latent values and the Source.

Facing the possibility of self-destruction, humanity is at a bifurcation juncture of a needful choice, symbolically represented in the Bhagavad-Gita by Sri Krishna placing Arjuna's chariot in between the contending armies just before a devastating war – at a point of diverging ways either to annihilation or evolution to the higher stages of Freedom.

The crux of this impasse facing the modern humanity is pinpointed by Bertrand Russell thus: "Unless there is increase in wisdom as much as in knowledge, increase of knowledge will be an increase of sorrow." Although largely materialistic in his worldview, Russell says in his book, 'Impact of Science'on Society': "Whatever else may be mechanical, values are not, and this is something which no political philosopher must forget."

Thus, the eminent rationalist intuitionally acknowledges something deep within, which is not mechanical. An open-minded observer of the phenomenon of organic evolution can realize that along with structural advancement of the brain there has been a gradual evolution of values as motherly love, concern for preservation of the offspring, etc., even among the insects!

This signifies that the expression of higher values are associated with the emergence of the mental faculties. The biologist Sir Julian Huxley refers to the expression of curiosity among some birds and animals, which may be a forerunner of the sense of inquiry in the human being. Significantly the renowned neuro-scientist V.S. Ramachandran points out that at the very inception of the human brain it seems to be structurally equipped for fundamental existential discoveries, a possibility which cannot be explained in the light of natural selection alone.

The human mind is thus biologically designed to search its Source, which continues through the ages. This destined fulfilment is highlighted in the Swataashvatara Upanishad: "Human beings through their technical skill may even roll up the sky like a piece of cloth, but there will be no end of sorrow till they realize the luminous Source within." The Upanishad evidently points out that the future human evolution calls for the study and inculcation of the cosmic value system – the dharma – biologically latent in the life-stream.

The world over today there are basic inquiries on a vital issue - whether the brain creates the mind or vice versa. But, many of these modern investigators are unfamiliar with the profound studies on consciousness of the ancient Indian explorers, who projected centuries ago the cerebro-spinal system as the most important foundation of the human condition and chalked out the subtle energy states associated with it. Meanwhile, Isaac Asimov points out in his book The Human Brain, that the modern idea of the brain as the seat of thought and the receiver of sensation was not definitely established until two centuries ago.

Sir John C. Eccles, the Nobel laureate for Medicine and Physiology reminds the modern scientists: "If the value of research is to be measured in relation to the intrinsic value to man, the brain research must rank as incomparably more important than space research, which commands a very much greater financial support."

Evidently, the scientist means by 'brain research' an in-depth study of the strategically structured nature of the human brain to realize the higher faculties of consciousness and thus bestow a heart to Science to help evolve humanity to greater stages of existence. That may help humanity to realize the perennial motto expressed in Sanskrit: Vasudhaiva kudumbakam –the universe is essentially one family.

It is for a greater fulfilment the human being is biologically equipped, as expressed in the salient observation of the thoughtful biologist Sir Julian Huxley:

"In the light of our present knowledge, man's most comprehensive aim is seen not as mere survival, not as numerical increase, not as increased complexity of organization or increased control over his environment, but as greater fulfilment – the fuller realization of more possibilities by the human species collectively and more of its component members individually....

"Once greater fulfilment is recognized as man's ultimate or dominant aim, we shall need a science of human possibilities to help guide the long course of psycho-social evolution that lies ahead."

Till the dawn of the 20th century, the materialistic logic was that the basic forces were the result of collision among the solid atoms. This belief was later amended on realizing that subtle energy is the basis of the gross matter. Evidently, the next stage can be the discovery of consciousness as the ultimate Source of both.

A breakthrough to further evolutionary expansion calls for replacing religious obscurantism and over-mystification through a scientific assessment of spirituality as a means of human evolution. Such research will help find answers to the perennial problems of existence through creative higher reasoning and effect a paradigm shift to a goal-oriented sea-change in human attitudes.

The basis of all the truth-seeking systems evolved in India is the highest concept of a value-programming in Nature –Dharma - as the very foundation of the cosmos. The effort is to evolve this mission as a forum to coordinate motivated efforts for such integrated research to promote scientific awareness of the basic value system of Dharma and help realize the evolution of a super-human civilization, eschewing war and destruction. Timely goodwill and support extended to the mission will serve the larger interests of humanity. 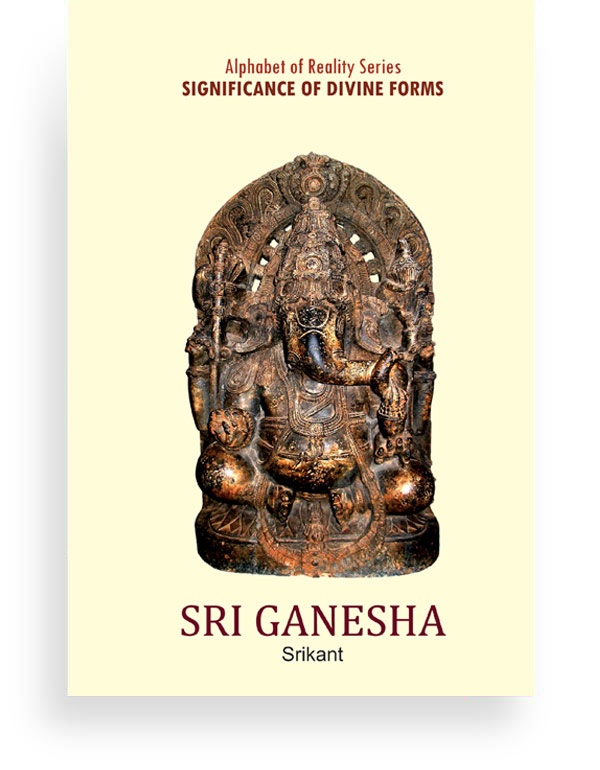 Significance of Divine Forms This book is an inspiring exploration into the Ganesha theme. By integrating the ancient insights and the modern scientific perspective, it reveals .. 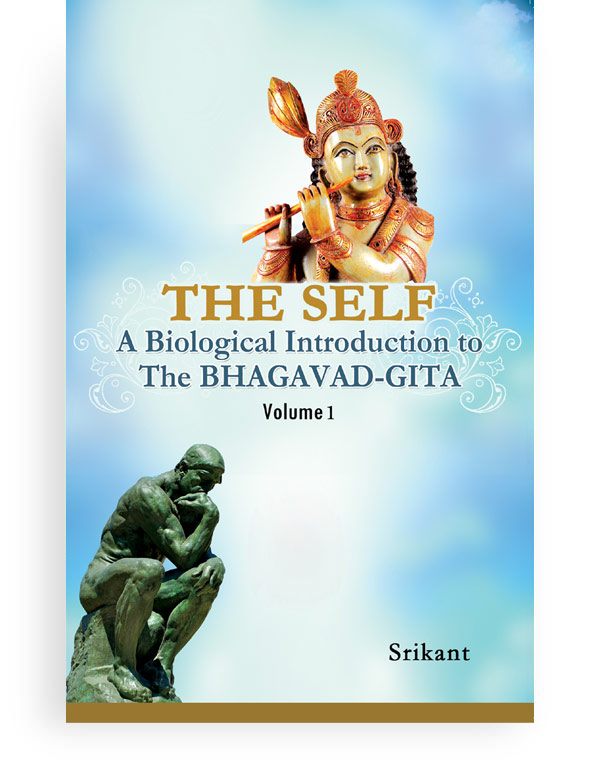 The Self-A Biological Introduction To The BHAGAVAD...

The Resplendent Wisdom The deepest studies of the phenomenon of Man and his destiny presented millenniums ago in the Bhagavad-Gita assume prime importance today when man stands .. 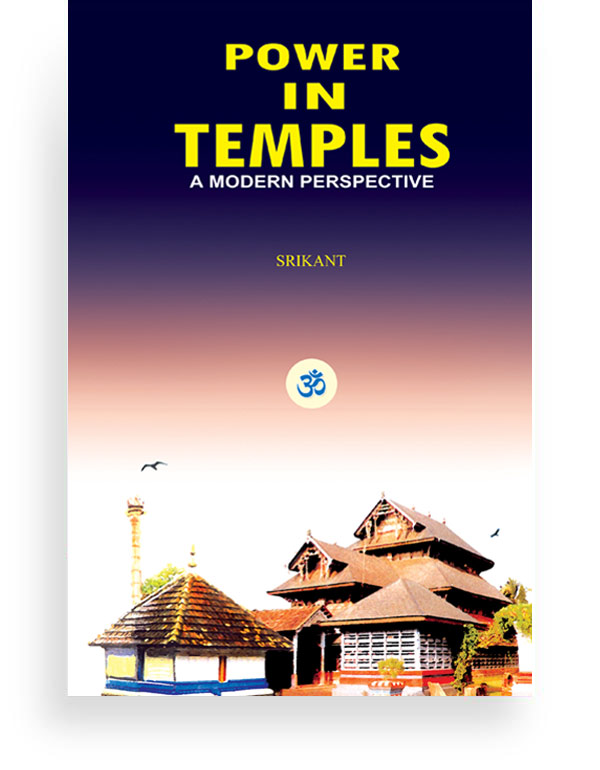 Power in Temples- A Modern Perspective

Power In Temples- A Modern Perspective There is a well-coordinated system of knowledge behind the institution of temple and temple worship, which takes into account the subtle fac.. 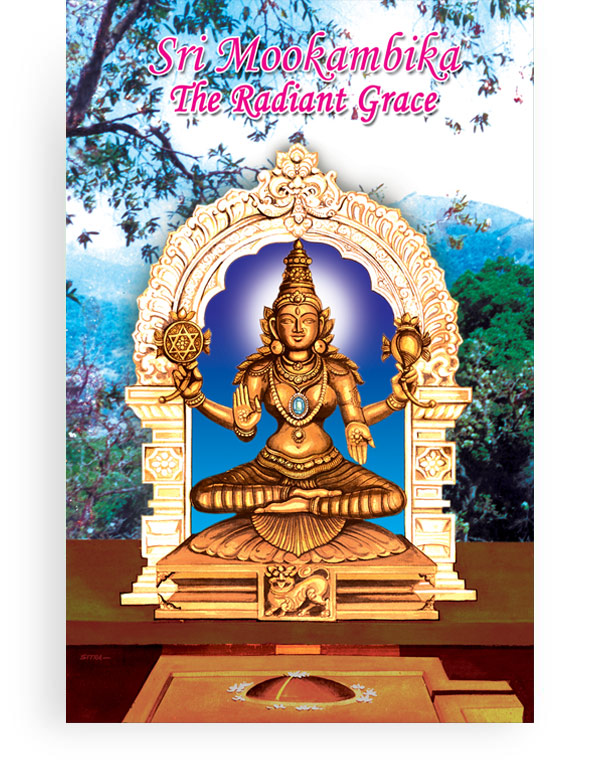 The Radiant Grace From time immemorial, the temple of the Divine Mother, Sri Mookambika, in the valley of the Kudajadri peak of the mountain ranges of the Western Ghats, has bee..

Significance of Divine Forms Worship of the Sun-God has been a universal phenomenon. In India, Sun-worship inspired a relentless philosophical quest that probed into the deeper r.. 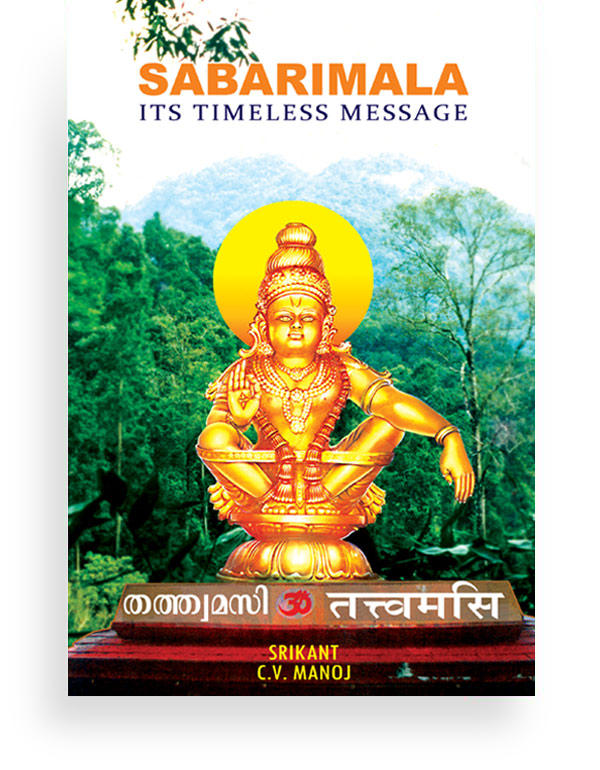 It's Timeless Message During the season of pilgrimage, millions move towards the shrine of Sabarimala, deep within the lush green tropical forests of the Sahya mountain ranges to ..