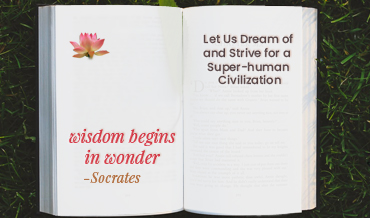 Let Us Dream of and Strive for A Super-Human Civilization

It was heartening to feel that we could anticipate an emerging thoughtful generation, as I heard a little friend of seven years standing beside me wondering about how speedily we were nearing 2020! For, it is this very faculty of wondering that we are missing in modern life.

A few moments ago, I heard a talk in the YouTube by a renowned magician having an earnest sense of social commitment mentioning about the insensitiveness seems to be gripping the social fabric and suggesting some means to bring about a positive change in attitudes.

One reason for this insensitiveness that the illustrious magician pointed out was the absence of cordial discussions in families, as the precious time was being claimed by the mobile phones and the internet. He reminds of the fact that we are in this wonderful world only for once and so life should be made as joyous and beautiful as possible.

The world, of course, is speedily progressing in science and technology, but humanity as a whole is in the severest existential crisis in history, even facing a risk of total destruction. One is reminded of the words of Bertrand Russell that unless there is an increase in wisdom as much as in knowledge, increase of knowledge will be increase of sorrow

Beginning with the topic of magic, why do we enjoy it so much? Because it nurtures our natural faculty to wonder, the greatest gift nature has introduced at the human evolutionary stage. It is the initiator of all enquiries, discoveries and achievements. It is also the special human trait that can inspire us to evolve further.

Darwin’s theory presents natural selection as the pivoting physical factor in evolution. Anyway, an evolutionary movement proceeded ahead from the life-throbbing protoplasm eventually resulting in the emergence of the human being capable of in-depth inquiry. Presently, man is at the zenith of the living world equipped with a brain that can strive to unravel the secret of existence and bring life closer to the harmony of, or, as the Yoga theory has it, even be one with the fullness of the Source.

Humanity at a Bifurcation Point

Darwin in his later years, as revealed in his autobiography, suspected atrophy of certain parts of his brain, which express the higher sensibilities that bestow a meaning to life. He attributed this perhaps to his too much engrossment with the physical factors in his studies on evolution. In the ladder of evolution the lower gets fulfilled by the higher.

According to the materialistic belief man is just one among the thousands of living beings. An open-minded study of evolution would reveal that the human being is not just one of them, but their highest fulfilment, a connecting link in between them and a higher stages of consciousness still awaiting to emerge.

It was thought-provoking to see the same magician demonstrating a mind-reading feat. Though it seems to have the nature of a preliminary experimentation, it points out to the many higher faculties of human consciousness, which are elaborated in the chapter Vibhuti-paada of Patanjali’s Yoga-sutras. However, the present critical juncture reveals that through the phenomenon of evolution humanity is now at a bifurcation point - either to choose a head-long fall to self- annihilation or further evolution to wondrous heights.

Reinforcing the Faculty to Wonder

Whatever be the educational achievements of the modern world, if this basic faculty of wondering about life gets stagnant, the result will be insensitiveness and heartless cruelty. It is this stagnancy that has today placed humanity at a blind end of a likely doom by the competition to invent still stronger weapons for mass destruction.

There is an exemplifying character in the Puranas reflecting this human condition - Bhasmasura, the Ash Demon. He engages in intense austerities to acquire immense material power to annihilate all, but eventually gets himself annihilated by a divine intervention. For the very survival, humanity today has to seek from within such an intervention.

One of the founders of nuclear physics, Max Planck says there is actually no matter as such and the grossness is only an appearance created by energy forms, which he assumes may have a conscious background. Yet, clinging to the classical physics the materialistic approach imposes a belief that life is just an accidental emergence of senseless matter.

This creates a sense of utter human insignificance and helplessness in an infinite universe of millions of galaxies, solar system and planets. Finding no hope anywhere, no higher goal to strive for, no need to believe in values as empathy, love, etc., the human mind tends to cling selfishly to the material possessions, the only security that can be conceived.

Progression to Ever Greater Heights

This delusion of material security in a ‘meaningless’ world is the root cause of the ruthless selfishness resulting in the incidents of burning women, murders, huge deposits in Swiss Banks and the world wars. An in-depth study of organic evolution would reveal the emergence of values along with the evolution the life stream. For instance, unless there was motherly love, the evolution would have stopped at the level of insects. Thus the survival of the helpless infant effected by a purposeful value is meaningfully complementing at a higher conscious level the mere mechanical theory of the survival of the fittest.

The need today is to gather scientific clues to convince that the human condition is not an insignificant chance occurrence but a purposeful stage of the life-stream in its progression to ever greater heights. Sir Julian Huxley, the neo-Darwinist, advises not to neglect the extraordinary expressions of life, but to take them as clues to the possibility of ‘psycho-social evolution that lies ahead’, which would help speed up the much awaited paradigm shift in human thought essential for survival and further evolution of humanity.

Suppose the evolution of life had stopped at the chimpanzee level. A chimpanzee can never conceive the possibilities of life at the human stage. Likewise, it is difficult for an ordinary human being to imagine the nature of possibilities and faculties of consciousness at a super-human level. Yet, as we can reasonably judge from the process of evolution that life is imbued with the impetus to go ahead. It is not a stagnant and random process as the materialists believe and try to make others believe. Man is the fulfilment of the lower animal kingdom.

Our brethren at the lower stages were rather pushed ahead by nature. And at the human stage dawned the capacity to know that nature has entrusted humanity level the responsibility of further evolution by endowing the freedom of choice.

The ancient Sri-Lalitaa-sahasranaama-stotram, a profound hymn on Paraa-shakti, the One Supreme Energy of infinite potentials, reassures that the unconditioned freedom of Supreme Intelligence is accessible through a harmonious combination of four means: creative imagination (bhavanaa-gamyaa), devotion (bhakti-gamya), meditation (dhyana-gamya) and knowledge (jnana-gamya). Life is a supremely meaningful phenomenon.

Pliability beyond the Gross Framework

The background of the manifested universe under the limitation of the space-time-matter framework, which the materialist considers as a senseless phenomenon, is the subtle Energy, which can be defined as an infinite CAPACITY having pliability for expression as infinite manifestations.

Science vaguely projects a singularity as the source of time, space and the ocean of energy. The wondrous magic of the emergence of the billions of galaxies containing billions of solar systems and their planets possibly with living beings, all conditioned by space and time, are the outcome of the pliability of Energy, the dynamic aspect of Reality, indicated by the term Brahman. Brahman is defined in Rig Veda as Prajnaanam Brahma – Supreme Intelligence. It is Intelligence (Prajnanam) and Energy Supreme (Paraa-shakti). The magic of Paraa-shakti are the infinite manifestations, which Itself is basically Oneness, no time, no space, no galaxies separated by light years. A magician’s feats also are an earthly expression of the pliability magic of Paraa-shakti. Modern physics has a vague idea of discovering Paraa-shakti, as reflected in the hope of evolving a Theory of Everything.

Millions of planets may contain super-civilizations that have evolved to the unconditioned freedom of the Source. Unless the earthlings chose the folly of the self-destroying Bhasmaasura, the magic of a super-human civilization will emerge on this globe also.

A paradigm shift in human perception is the need of the time and in this the following observation of Sir John C. Eccles, a Nobel Laureate for Medicine and Physiology, assumes great importance, “If the value of research is to be measured in relation to its intrinsic value to man, the brain research must rank as incomparably more important than space research, which demands a very much greater financial support. ”The veteran scientist evidently means by brain research an intensive study of human consciousness and its higher possibilities, which can bring about a super civilization.